Getting the New Car On Track 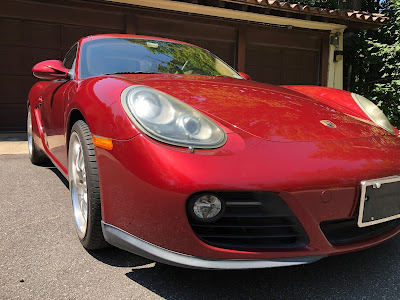 With the move to German engineering and the Porsche Cayman, NMS-North has scheduled their first track event with this car for October. Driving with the NASA-Northeast folks, we'll be up at Palmer Motorsports Park in Massachusetts for a weekend of driving with an instructor in an effort to learn how to get around that track! This will be my fourth NASA weekend, and I'm still in the beginner High Performance Driver Education (HPDE) group 1. No racing, no prize money, just going out there and improving all that lack of technique!

You can start driving on a track with a just few simple items, like a car, and a helmet! Sure, it would be nice to be driving a bazillion dollar race car, but any car that can safely go around the track is fine for learning the basics. Let's take a look at what other cars are signed up for this driving group so far:

Let's see, the new Toyota Supra is nice and fast, plus you get a free NASA membership if you buy one! The Miata is always a great handling car on track. And the BMW M3 is a monster car too. Looks like a fun group, good thing we're not racing!

The NASA folks have 4 levels of HPDE, so with such a small group we'll probably be on track with the HPDE 2 drivers, let's see who is signed up for this group!