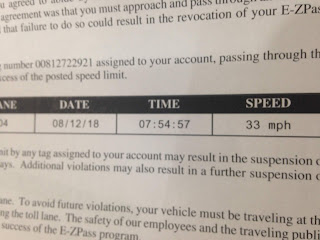 This week I got this awesome bit of mail that let me know that I was speeding going through the toll plaza on the George Washington Bridge in New York City. Key highlight here is that it was just a warning, not a ticket, and there is no fine. However, it states that if I speed in the toll booth area again I might lose my EZ Pass. That certainly has my attention, and I hereby resolve to be a safer driver and obey the speed limits in the toll plazas.

One detail of the letter was that it told me I was going 33mph, but it didn't tell me what the speed limit was at that particular toll plaza. Depending on which web site you read, well, it looks like there are different speeds posted at different locations, so I need to pay attention to the posted signs at the toll spots.

On the other hand, the other key point I'd like to make is that for the first time in my short experience of being a New Yorker, there was NO TRAFFIC ON THE GW BRIDGE! This was about 8am on a Sunday, coming back from Pocono Raceway, so it was a huge shock that I was not sitting in stop and go traffic before and after the EZ Pass toll booth! Man, it was awesome to just roll up to the bridge, go the length of the Cross Bronx Expressway, and drive all the way home to Long Island. I may never again hit that stretch of road with no traffic, so it was pretty fun! The other fun part of that weekend was going the other direction super early on Saturday, thru Queens and the Bronx and actually being able to see Yankee Stadium without fifty tons of traffic all over the place.

So, my NMS tip-o-the-day: if you have to drive in New York City, make it early in the morning, but don't speed, even in the toll plazas!
Posted by robert.a.nixon6@gmail.com at 1:55 PM