Like most Americans, we watch the TV from time to time, and will even read the odd magazine or book, mostly if it's auto racing related. Here's a quick round up of stuff that caught our eye outside of the internet.

1. On Amazon Prime, surely the BEST car show on TV, The Grand Tour! This is season two of this show, which turns out to be amazingly like the BBC Top Gear show, since it features the previous stars of Top Gear. With Jeremy Clarkson, Richard Hammond, and James May managing to drive and/or destroy everything interesting that comes on wheels, their brand of funny entertainment and road going vehicles of all kinds has been the gold standard for many years. While the first season of The Grand Tour was a bit rough around the edges, I'd rate the 2nd season is right back to landing in the "great" category again, so thank goodness for that! They got rid of "The American" character from season 1, briefly let us know that their new driver is Abbie Eaton without really featuring her yet, and continued having famous people drive an awesome Jaguar around their paved and dirt track for bragging rights. The highlight of that particular bit in each show was the episode that determined who was "The Fastest Drummer from a Band Whose Name Starts With P". Since I already knew of Nick Mason from the band Pink Floyd and Stewart Copeland from the band The Police, I thought this was great!

2. A new show on Amazon Prime is Grand Prix Driver, and it was just released February 9th. I watched all 4 episodes at once (since they're only about a half  hour each). The show was filmed to get a behind the scenes look at the 2017 McLaren Formula 1 team's season, so I had HUGE hopes for this being a great program! Unfortunately, the 2017 McLaren season was horrible, with the team finishing in 9th place out of only 10 teams. On the bright side, the first 3.5 episodes give us a look at the drivers, the team, the McLaren facilities, as they all are working to prep for the new season. That part was great, all leading up to the pre-season testing of the car on track. From that point on of course, the Honda motor kept having issues, and at this point the show grinds to a big halt. Instead of several more episodes of the drama of each race all year long, we get a quick wrap up of the season with McLaren dropping the Honda engine and signing a new deal for Renault engines to start in 2018. Seriously, that's it, no footage of any actual races last year, just the bottom line story that the entire season (that we don't get to see) was lousy!

Maybe I was expecting too much, but it was kind of like making a movie of the Titanic, showing everything going great, and then just informing the audience "but then the darn thing sank" and stopping at that! To give them the benefit of the doubt, if the car and engine would have been brilliant and the team had a good year, maybe there would have been more episodes. Who knows? So, if you're an F1 fan, you'll probably still like it, but if not, the main thing the show has going for it is the narration of Michael Douglas!

3. Another show I've watched a bit is Fantom Works on the Velocity Channel. Unlike most of the car/garage shows on TV, this one features a normal guy who runs a car repair shop in Norfolk Virginia without a lot of fake drama. We were lucky enough to visit them last year, and the last couple of shows we watched featured a lot of work on a 1962 Maserati, a 66 VW Beetle, and an Amphibcar that drives on land and in water. After taking the tour, we can confirm that they have a huge workshop and can fix pretty much anything to make it like new if you're willing to pay for it! 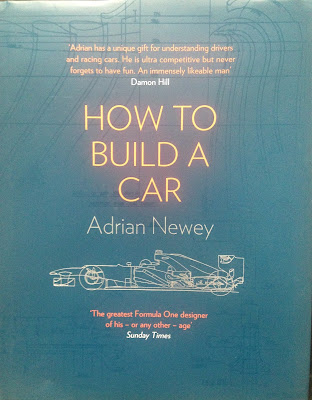 4.  Adrian Newey is currently the head designer for the Red Bull Formula 1 team, and over his career he's designed multiple world champion cars for that team and others. His book briefly runs down his life story and gets into some of the details along the way of his many years working in Formula 1, designing Indy Cars, and other car designs along the way like the  Aston Martin Valkyrie supercar. I enjoyed reading his book, maybe I just like autobiographies of people who do things I can't! 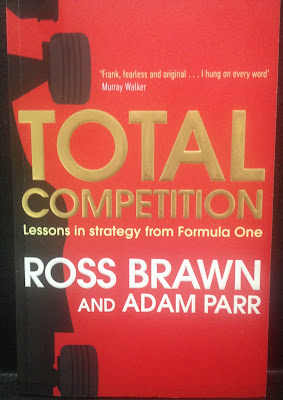 5. Ross Brawn is similar to Adrian Newey, and has also designed multiple world champion cars in F1. He was also the team owner during Jenson Button's championship year, which came about because the Honda company left Formula 1, so Ross and some others bought the team. Amazingly enough, they managed to get an engine deal with Mercedes at the last minute, and then won the championship anyway! Before that, you might have heard of a few teams he managed that won some world championships, Benetton and Ferrari, both with Michael Schumacher! Ross has now moved up to be one of the chief guys for Liberty Media that now own Formula 1, with Ross as the chief of technical matters for all of F1. That would be like Bill Belichick going on from coaching the Super Bowl winning Patriots to owning the team, and then becoming the Commissioner of the NFL too.

Unlike the Newey book all about designing cars, Brawn gets into the strategies of competition, which could apply in business as much as in motor racing. While the book isn't a step by step detail of the process that he's used in leading various F1 teams, it covers a lot of ground in the overall strategy of leading large teams and keeping lots of people focused on a team goal. Given his record in F1, I thought it was a fun book!
Posted by robert.a.nixon6@gmail.com at 6:36 PM