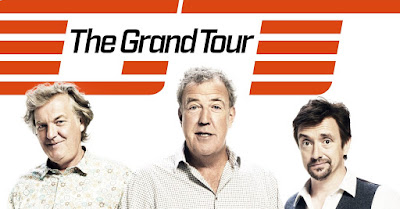 Yes, there are lots of TV, Internet, streaming, and other media ways to watch car shows, but the BEST way is if it includes these three particular blokes: Richard Hammond, Jeremy Clarkson, and "Captain Slow" James May. You know, the guys from the old British Top Gear show, now on Amazon Prime as The Grand Tour. Last year was the first season of this new format, so it's going to be great to have them return in Season 2, starting December 8th.

Other than general silliness all focused on automobiles, well, mostly about automobiles, the show tends to feature high performance exotics, as well as ridiculously cheap cars. Spanning the globe as it were, they'll cover popular cars and things we've never even heard of or imagined.

One change to this season is that "The American" recurring bit will not return. If you've seen the old Top Gear shows you know they had an unknown driver dressed in white who never spoke, known only as "The Stig." There seems to be some legal requirement that any show other than Top Gear can't have a silent, white clad, fast driver character without violating some trademark, so the Grand Tour last year came up with an obnoxious stereo-typical American type that was brash and bold and drove quickly. The concept was OK, but it was the weakest part of the show, so maybe this year we'll get some other character to drive cars quickly!

You can watch the season 2 trailer now on Amazon Prime or on their YouTube channel at YouTube
Posted by robert.a.nixon6@gmail.com at 6:35 AM