How Many Tires Do You Need? 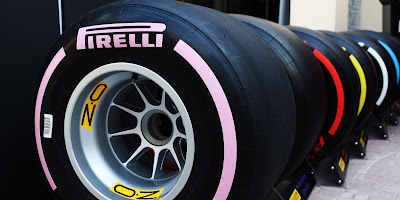 I know what you're thinking, that "I only need 4 tires on my car and I'm good." You might even then say, "Hey wait, let's include a spare tire, so I change my answer to 5." All well and good, four or five makes sense to me. Some folks might add, "Hey wait, I live where it really snows, so I have four snow tires, and four all seasons for the rest of the year, so 8 all together." Fine, 4, 5, 8, whatever.

Then some racer is going to point out that they go through tires like babies go through diapers, so they might have a stack of 8 slicks and 8 rain tires sitting around somewhere, so they win the who-has-the-most-tires competition.

MORE tires, more compounds, and more names! According to news announced this week, next year the F1 teams will have a choice of: 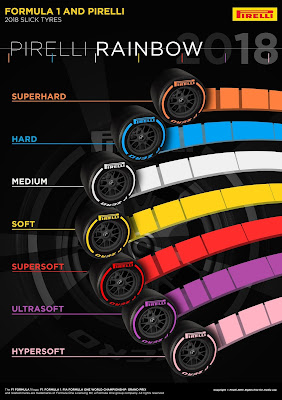 Now what would be really cool is if they just let every team pick whatever tires they want, instead of the current rule that mandates you HAVE to use 2 specific types of tires. Maybe they'll come up with something creative, so we'll wait for next season to find out.

Here's the link to the Pirelli Formula 1 tires for next year: Pirelli