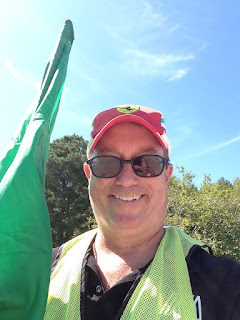 Behold, STARTER GUY! While other superheroes in the autocross galaxy of awesomeness hold unique powers that enable cone-calling-comprehension (CORNER WORKER GUY), or smooth-structured-supreme-scoring (SCORER GUY), it is STARTER GUY that truly controls the universe of moving vehicles as they jockey for position and proper launching into the complicated confusion of electronically determined placings and awarding of points.

Without STARTER GUY, the hapless machine drivers would surely collide with each other and render the race results futile and useless. STARTER GUY brings order to this confusing chaos and enables eager motor heads to magnificently mount their horse powered patrols and fight for freedom and victory on the hallowed grounds of PUNGO!

While brandishing his FLAG OF GREEN and RADIO OF POWER, STARTER GUY is the final authority on when competitors may unleash the Kraken, and most importantly refuses to allow them to launch until his eagle eyed vision has detected no cone lackeys lollygagging on course, and that safety of all peoples is secure.

It is rumored that STARTER GUY was born in the back seat of a 54 Corvette, and currently lives in the supercharger from a moonshine runner's Superbird, but little is truly known of STARTER GUY. Some say he never sleeps, and only eats hot dogs from the Martinsville infield concession stand, which requires him to have his sustenance mailed to him on a weekly basis.

Never-the-less, we can all rest easy at night knowing that the superheroes of autocross are out there doing their jobs, and that they will return at the next competition to preserve our racing rights!