The Tidewater Sports Car Club held a one lap tracking and non-autocross event on November 5th, and it was so much fun that the old FIAT got a little sideways. It has  been said that just about anyone can drive a car in a straight line (with the front in front and the rear end behind), but it takes a little extra special effort to find yourself going sideways on a track!


At the Academi training facility  track in North Carolina, we got to drive a hand full of runs in the morning, and then 8 more runs in the afternoon. While we didn't do a driver's track walk of the approximately 2 mile circuit (chock full of left AND right turns, NASCAR are you paying attention?), we did get to drive a slow parade lap to at least see the course and notice where the course workers were, before we drove it. Oh, and know where the finish line was!


My first two runs in the morning were nice and easy, not full speed, since I needed to get familiar with the layout and start getting the tires warmed up a bit. For what it's worth the timing system wasn't up yet, so I have no idea of times on these runs, and guess what?  It didn't matter anyway, since it was so much fun to be driving on a track! On the third run I gave it a bit more gas and got a time of 145.577. According to that timing slip I was in first place (out of only two of us) in the GS class, and it said 3rd on PAX time. I'm not sure if that was accurate, but we should get the official results in a few days to find out. After this morning session, it was time for a lunch break, so we headed to the luxurious NMS motor home and spa, downed a fine lunch of goose liver pate and champagne prepared by our executive chefs, and waited for the afternoon session. Or, maybe it was a peanut butter and jelly sandwich brought from home, sitting in a folding chair. Plenty tasty whatever it was!


Following the break, we were back out on course for our two run groups. While group 1 was driving, I was working as the starter for that group. Other than just telling the next driver to "GO", I was looking to make sure everyone had their seat belts and helmets on, spacing out the start in case the driver ahead had a problem, and using the radio to call in to the timers who the next driver was on the line. Compared to working on course, you always have something to do as the starter! Then after eight runs and higher temps getting into the 60s, it was time to get behind the wheel again. Buckle up, hold on, here we go!


Afternoon 1: Starting again for the first time I held back and ended up with a time of 147.358. A bit slower than probably my best morning time, so plenty of room for improvement. Maybe I'll step on the gas during the next lap!


Afternoon 2: For this run I pushed it harder, found a few places to go faster out on course, and managed to hit the line at 141.514, a nice drop of almost 6 seconds. Without boring you with all the driver talk and technical mumbo-jumbo, a driver really just has one easy task: Make the Car Go Faster!


Afternoon 3: Well, I tried some different stuff on this run, but knew that it was slower since in a few corners I was making terrible shifts. Oh well, not a lot slower, but 142.246. Maybe I was getting more consistent. That's just fancy talk for "not faster".


Afternoon 4: Went for the gusto on this one, tried to eliminate the errors from the previous run, and brought it home in 139.321, so that felt great to have dropped over 2 more seconds from my fastest. Hey, let's take a look at this run! RUN 4 VIDEO:

Afternoon 5: This run was similar to the previous one, and I was hoping for a faster time, but NO, it was just a bit slower at 140.428, somehow just over a second slower. Hmm, more of that "consistency" instead of more of that "faster", crap!

Afternoon 6: By this time I was scratching my head trying to figure out where to go faster, and while these couple of runs were fairly consistent for a track rookie like me, I didn't gain any time, and finished at 139.436, this time only a TENTH OF A SECOND off my best time so far. Curse you consistency!!


Afternoon 7: Have I got a video for you! There was this one spot on course with a LONG sweeping left-hander, which I was pushing through in 3rd gear, and near the end of it there was a bit of a hump in the middle of the track. On previous runs I tried to tap the brakes right before this so that the car would rotate a bit more and get through in good shape. However, on this run I over-rotated a bit and lost it, and had the fun experience of going sideways before I could bring the car to a halt. I managed to keep it on the asphalt and not go off into the grass, but of course this run time was going to be very slow. Finished the lap with my slowest time of the day 161.718. Fun video to watch, not so good for getting a fast time!  THE SLIDE VIDEO:


Afternoon 8: Last run of the day, and I'm not sure how this one went timing wise because the timing system was down. Maybe it was my fastest run of the day, maybe not. One thing I know for sure is that it was still fun! We'll get the final results and let you know if anything earth shattering comes from that, so in the meantime here's the rest of the first run group's parade lap. 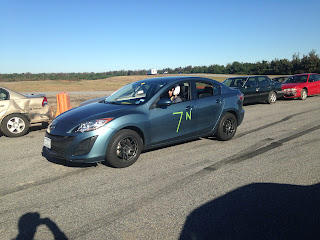 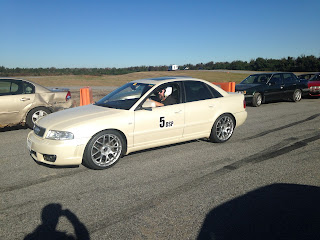 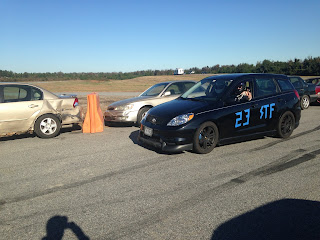 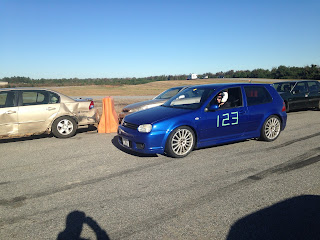