When it comes to talking about our cars, our goal at NMS is to be maybe entertaining, perhaps funny, but always honest, so I now have to report that my 2013 FIAT Abarth lit up it's Check Engine Light or "CEL" the other day. As they like to say on the internet to get you to read more, "WHAT HAPPENED NEXT YOU WON'T BELIEVE!"

OK, you'll probably believe it, because number 1, it's not really very exciting, and number 2 (see, that's the intended funny part right there because I got to say "number 2" which is very funny when your brain's humor button maxes out about at the 5th grader level like mine)...uh, where was I, that was a long bit of parenthetical discourse...

Oh yes, you'll probably believe it because the CEL was a result of my own wrong-doing! Oooh, "wrong-doing", now that sounds like maybe some law breaking or extra-curricular activity that happens after midnight in a seedy part of town down by the spooky waterfront, where....oh never mind.


So the light comes on the other day, and it seemed odd because the car was running fine, there were no drastic sounds or explosions, no black smoke coming from the exhaust or engine bay, just a big fat case of nothing! After driving home, I checked the car out in my garage and took the air intake off, checked all the various hoses and belts that you can reach inside the cramped engine bay, and didn't find anything out of place. OK, that's a lie, because then I found the gas cap wasn't on tight, and I'd just put gas in it the day before. Hmmm, just maybe that's all it was. I'd read that this happens to cars these days, since they are so sensitive and have so many sensors, that even a loose gas cap will light up your CEL.

What I still didn't know, and even putting this question on a FIAT forum on line didn't get me much help, was if the CEL was supposed to go off by itself if you've corrected a loose gas cap. Being a big fan of the cheapest possible fix, whether it's my car or a broken bone, I was thinking it would clear up by itself.

My research of the owner's manual didn't give me any clues, so I knew it was time for professional help, which believe it or not is FREE! If you get a CEL, and your car still drives OK, just head over to your nearest auto parts store and they'll plug their OBDII reader into the plug in your dash and tell you what the code means. Mine said that maybe the gas cap was loose, and also listed about three other possible causes. This made me feel like we were on the right track, since if it WAS the gas cap, then I'd already fixed that. However, this made me feel bad since if it WASN'T the gas cap, then I'd have to go pay the friendly FIAT folks for the use of their diagnostic computer thing to find out what was up. All this time, the car was running fine, so I decided to drive it a few more days and see if the CEL went away. 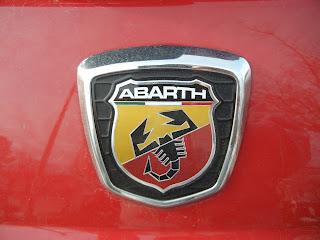 The happy ending was that then the next day, the CEL went away! Various theories are that after correcting the loose gas cap that the computer system has to drive a certain amount of miles, or a certain number of starting/stopping before it will clear the code by itself. Regardless, we have a happy ending! Special thanks to Auto Zone for the CEL code read out too.
Posted by robert.a.nixon6@gmail.com at 4:05 AM