In Part 1 of the series, we examined a turn by turn look as we walk the course before the event to get a feel for the layout.  In Part 2 we'll examine the side by side video of how everything actually went down:

The differences between the two drivers is very subtle in these videos, but there are a few key items that were done better on either side of the frame.  If this was wheel to wheel racing it would get pretty dramatic and there would most likely be more body damage than the team would like to pay for, so we've voted to keep autocrossing for now! 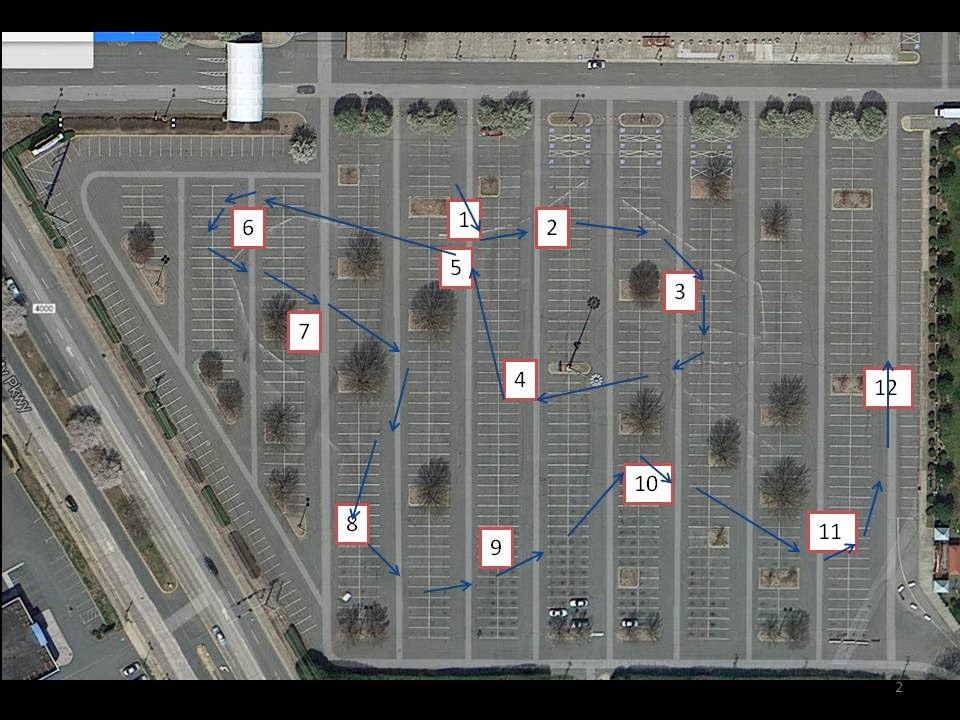 Let's reference the top-down map again and follow on through the video...

Off the line we see both drivers get a good start through the timing lights (1), but Brian holds off shifting into 2nd gear slightly longer to gain and carry more speed through the quick left (2), right hand sweeper (3) and down through to the first hard braking zone (4). We're at 15 seconds in now and though Brian is applying the brakes harder, he's still too late and runs wide through the tight right hander (4) where Bob is more smooth and comes around the corner (5) quicker and on a better line allowing him to start accelerating sooner than Brian as they come down to the tight left hand hairpin together at 23 seconds (6).

Coming out of the hairpin (6), Brian again struggles with understeer from braking too late and runs wide.  Bob runs a better line around the corner but Brian refuses to let up on the throttle and muscles the car around the right hander (7) and finally catches Bob again as they plunge down hill (8) into a big sweeping left hand turn (9).

Heading back up the hill through the sweeping left turn still (9), Brian carries a little more speed but predictably cannot slow the car early enough in the tight right hand corner (10) at 38 seconds.  Bob accelerates out of the corner more quickly and continues to more smoothly carry speed as the drivers round the final left hand turn (11) which delivers more speed and launches the #77 car up the hill (12) and across the line 0.2 seconds before Brian (and without touching a single cone).


The NMS team hasn't yet cracked a way to clone the two drivers into one and steal the strengths of both, so we will continue to analyze videos and learn what we can from each other the old fashioned way.  Coming up this weekend the team travels to Laurens, SC and the Michelin Proving Grounds for the second time this season to duke it out with the combined driving talent of the SCR and CCR groups.

Check back next week when we try out the #86 POV camera for a few runs to get a better sense of what the course looks like from the actual driver's perspective.  This should be a good way to see just how much we have to keep looking around.