Let's Get This Thing* on the Road! 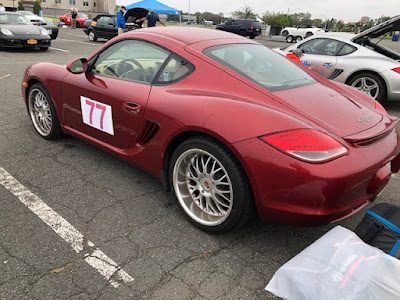 (*by saying "Thing" in the title, we are NOT putting a VW "Thing" on the road)
Today we're kicking off a driving weekend at Palmer Motorsports Park in Massachusetts, so this will be my first track time with the Cayman. So far I've got some good wheels and new tires for the track, and I've stocked up with some oil for an oil change, and got an extra set of brake pads ready too. What amazes me is that in all the car-driving-story-telling-and-writing world, I bet 90% of the time folks will go on and on about making a car faster, work on getting more horsepower, yet forget that when you go faster you also need to be able to stop better! In other words, even the most powerful car in the world probably needs to be able to stop too!

Current weather reports are for a good amount of rain Friday and Saturday. That's OK, a little rain never hurt too bad, but some dry driving Saturday afternoon and Sunday would be even better. The track at Palmer is a curvy one, lots of guard rails and rock faces, since the track is carved into a hill. That translates into taking it easy as far as I'm concerned, and keeping things safe at all times. With this type of track day, and being out there with at least 31 other cars, we'll only be allowed to pass each other in certain areas, so that keeps things on the safer side.

Here's a list of current "things" that will be driving in my group. There's a total of 32 drivers so far, with the Toyota Supra leading the way, followed closely by the Mazda Miata. Brand-wise, Toyota-Scion has the most entries, with BMW and Mazda trailing. Looks like a good variety of cars will be on track, so let's make sure those drivers pay attention and avoid any contact!