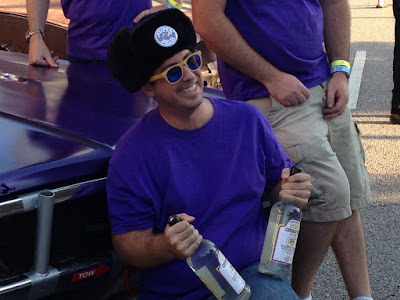 Hey sports fans, happy Friday night, and we hope you're going to have a great Super Bowl weekend. Besides the weekend and the Super Bowl Sunday night, here's a quick round-up of other things going on:

1. Brian and Team Coronautski is RIGHT NOW at Barber Motor Sports Park in Alabama for their second Lemons race with the 72 Dodge. In their first race last fall they were competing in Class B, but this time they've been put into the slower class C, so we predict a great showing over the hours and hours of racing on Saturday and Sunday. Look for Brian's update sometime in the next few days. We know they had a flat tire on the car trailer on the trip earlier today, but everything is now on track (so to speak!)

2. NMS-North is planning on a trip to Philadelphia to check out the big Auto Show downtown on Saturday, so look for a sneak peek at some new cars next week too. We've attended other new car shows in a few places like Detroit, St. Louis, Washington DC, and other spots, so we're hoping for a great experience in the city of brotherly love. We won't still be in town when the Super Bowl kicks off, but for the day and a half in the Eagles home town, GO EAGLES!

3. Other motor sports going on this weekend include a Formula E race from Santiago Chile, so if you can find it on line, check it out. A few more weeks and we'll have Formula 1 returning to testing and then racing in March, so in the meantime maybe Formula E and the kick-off of NASCAR soon will help feed the motorsport habit.
Posted by robert.a.nixon6@gmail.com at 3:41 PM