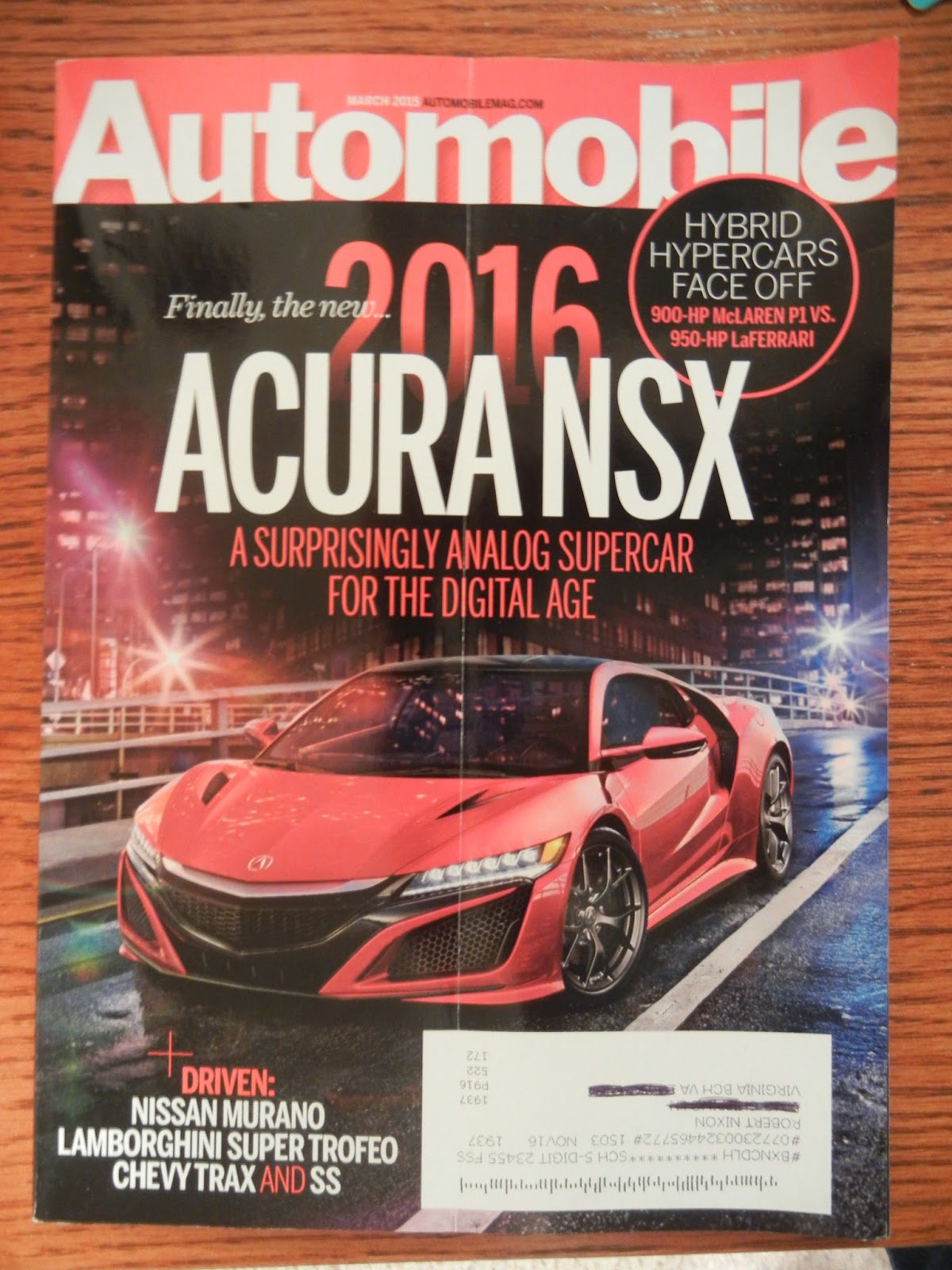 The latest round of car magazines have flooded my house, much like  the expensive commercials that flooded the Super Bowl, so here's a quick round up of the latest things we're reading...or, pictures of cars we're looking at, at NMS North:

Automobile: Surprise, this magazine that comes from the Car and Driver folks ALSO has the same cover feature, the Acura NSX.  Despite TWO magazine covers at the same time, this car still will cost about $150,000, and will still be the coolest thing made in Ohio since the invention of the Etch-A-Sketch. Or the Wright Brothers machine, take your pick. Or Pringles.

Seriously, this month, Automobile leads the pack in a great all around issue with stories on cars of all types. My favorite was a 10 page story on various Lancia models built in Italy over the years, lots of cool photos, and YES, my favorites the Lancia Scorpion and Lancia Stratos!  Five stars for this issue! 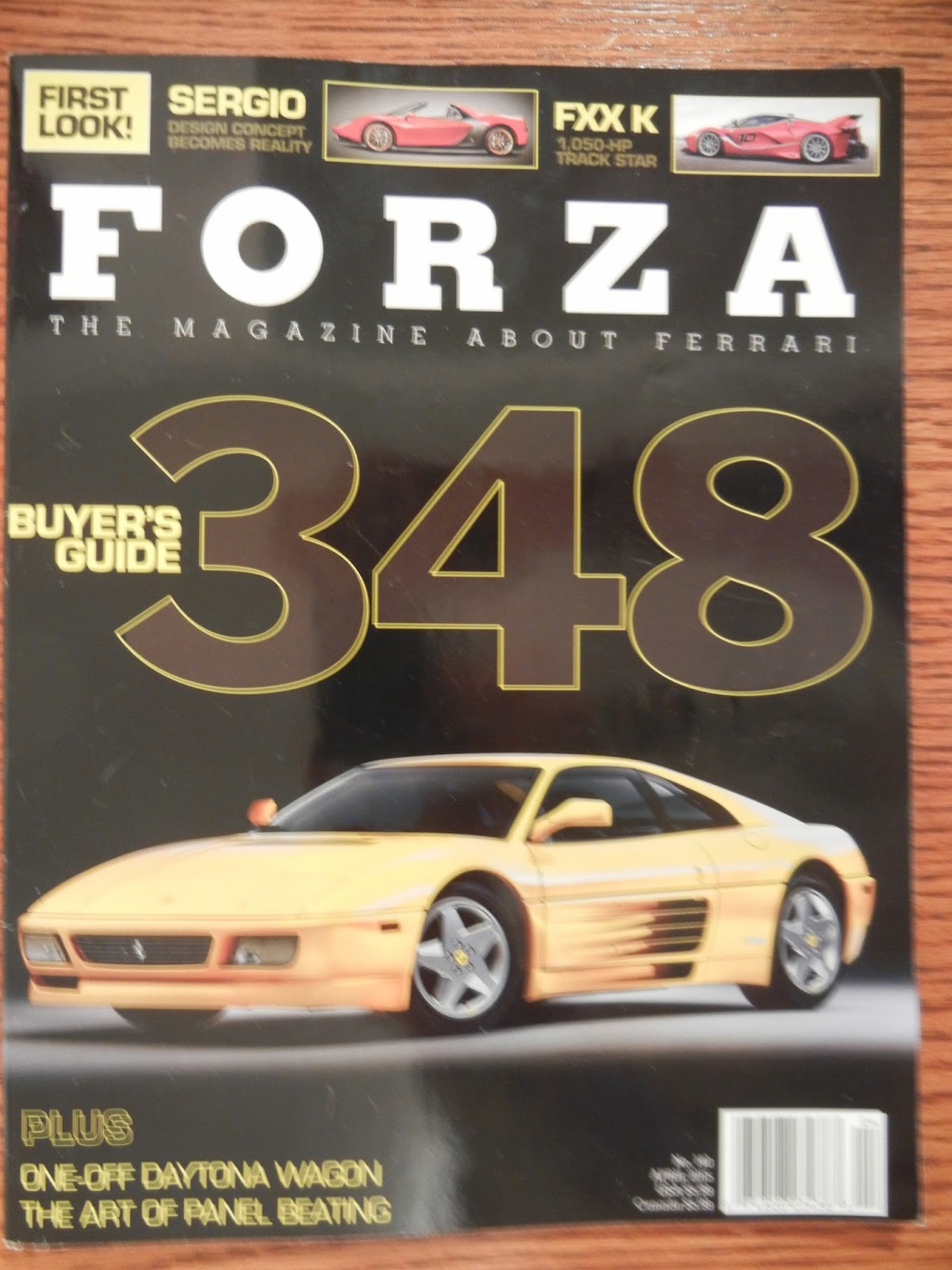 Forza: Did I just say something about Italian cars like Lancia? Yes.  If that is one of your interests, then I can ALWAYS suggest Forza!  This is is the magazine you want to read if you are interested in Ferraris. F1 Ferraris, modern street Ferraris, historical Ferraris, Enzo Ferrari, etc. If it has the word Ferrari in it, it's in this magazine. The latest edition features a buyers guide to the 348, the V8 powered car built from 1989-1995 which the magazine now suggests could be bought ranging from $25,000 to $50,000  depending on condition. I don't know about you, but the idea that I could have something like this instead of another new Camry is a VERY interesting idea to have rolling around in one's head. Notice I didn't say brain, but head, or maybe heart if your passion is for cool Italians. Or Cars. Or Ferraris. 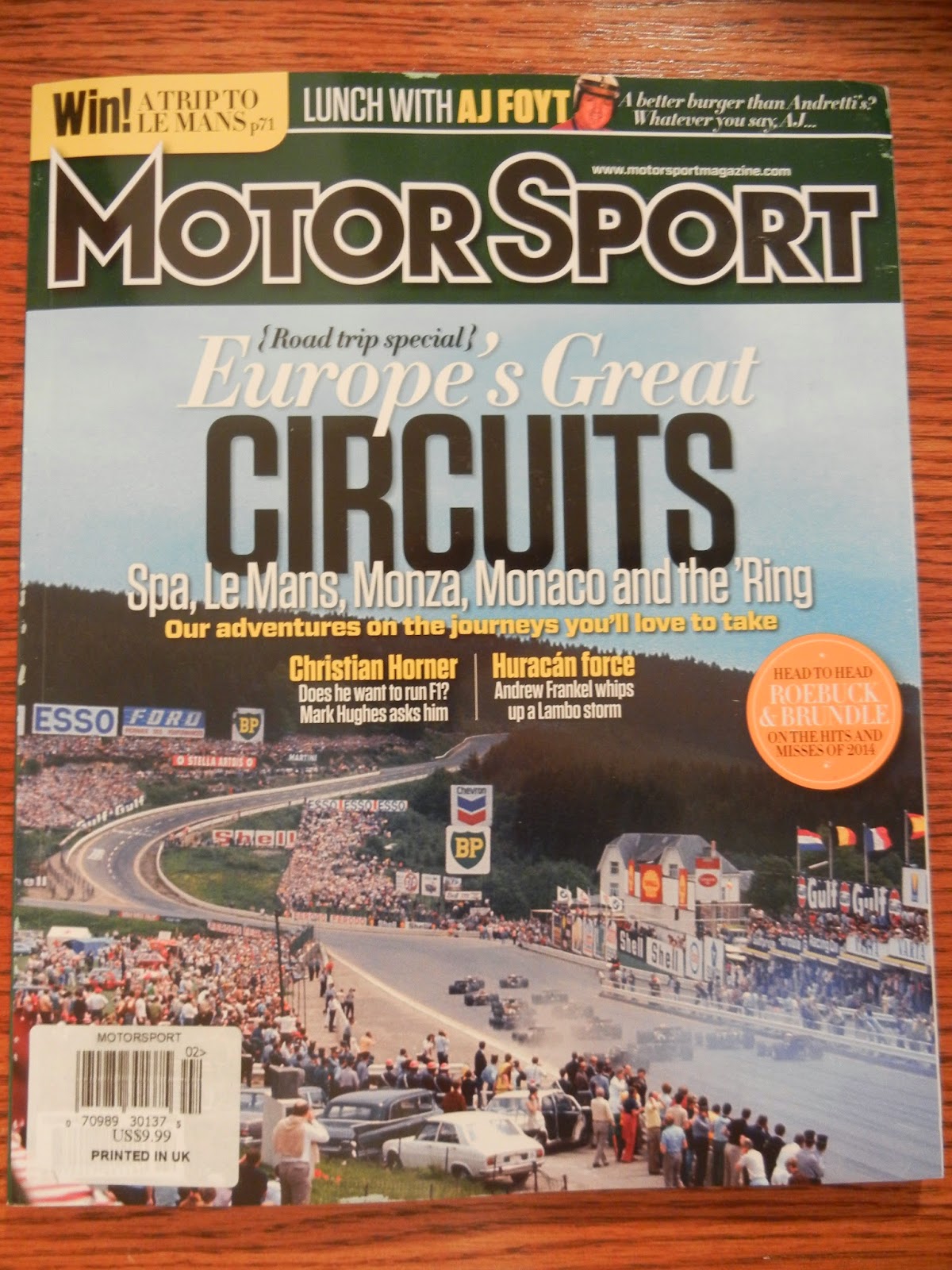 Motor Sport: Cover feature is "Europe's Great Circuits", so right there I'm willing to plunk down my American money for this British import magazine to read about F1 tracks like Spa in Belgium, Monza in Italy (where they have all that Italian food), and the Nurburgring (where they must eat a lot of Nurburgers).  That's the best F1 race track joke you're getting out of me today too! Another great article is an interview with AJ Foyt, great reading! Two other articles worth the price of admission: interview with Red Bull Racing's Chris Horner, and more F1 insider news and opinions from former driver Martin Brundle. Add tons of cool British car ads, and it's worth the high cost of buying this imported magazine when the articles are this cool and you like stuff like Formula 1 or AJ Foyt. 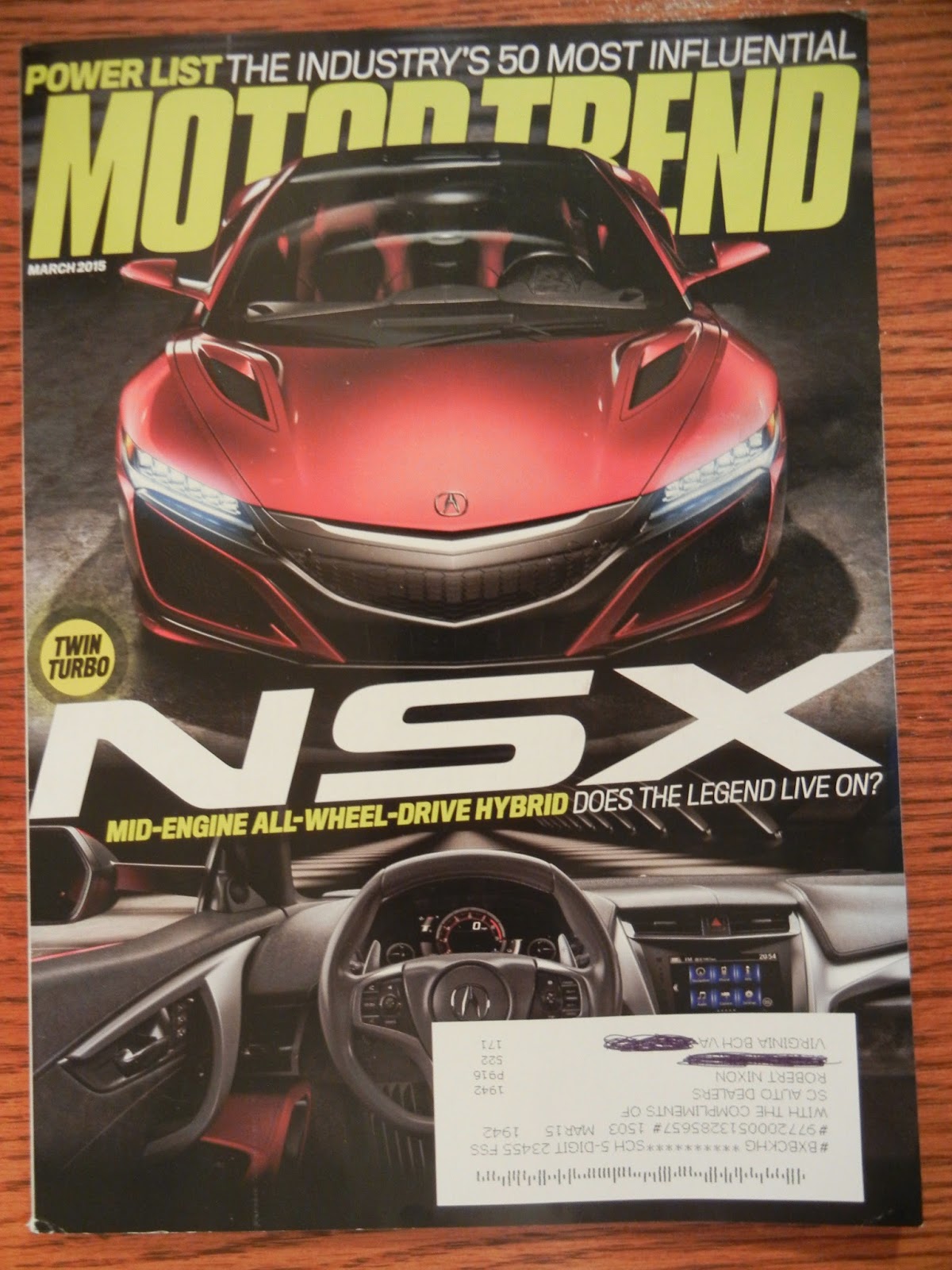 Motor Trend:  Another one of the big ones from the USA, this month we find the Acura NSX also on the cover just like over on Automobile.  While I really WANT to drive the next $150,000 car that will be built in my home state of Ohio, well, I REALLY want to drive this thing some day!  Some of the other articles include a mini-van shoot-out, review of the Dodge Charger SRT Hellcat, a Camaro Z/28 VS Porsche 911 GT3 comparison, and a compact crossover article that compares the Chevy Trax, Honda HR-V, Jeep Renegade, Mazda CX-3, and the new FIAT 500X. All of those are pretty new to the market, and I'm looking forward to checking out the FIAT and Mazda at least, keeping it all in the Miata/FIAT Nixon Motorsports Stables brand community!  All in all, save your money and pick up Automobile for their NSX review, unless you're in the market for the cars I mentioned here, or a minivan. 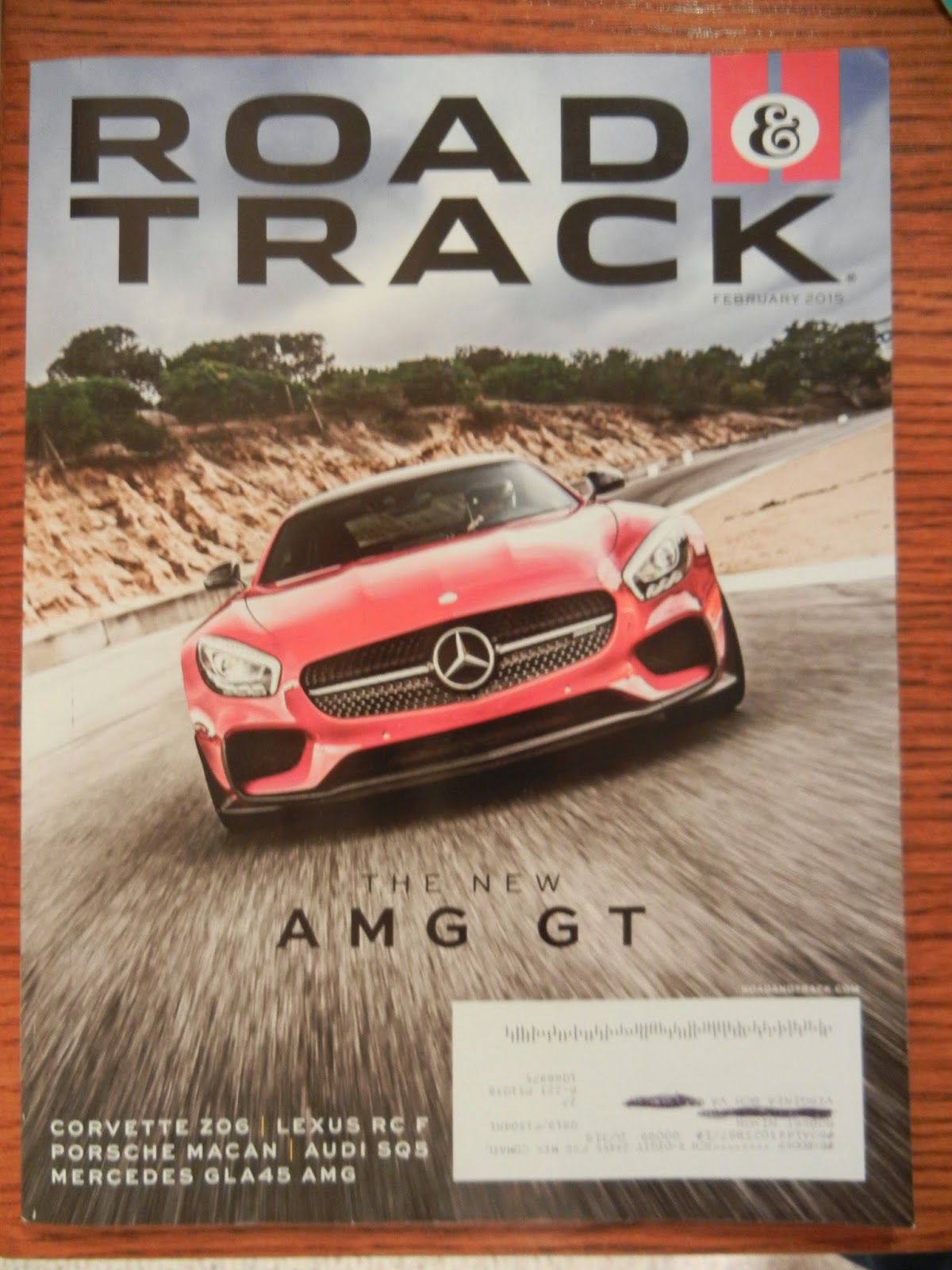 Road and Track: Cover feature is "The New AMG GT" from Mercedes. Without reading the article I already know this is a cool, high quality German engineered car that I am nowhere close to being able to afford or interested in driving, but of course if someone wants me to test drive one, I am available! Other cars that are "too-expensive-for-humans" mentioned on the cover are the Corvette ZO6, Lexus RC F, Porsche Macan, Audi SQ5, and the Mercedes GLA45 AMG. Let me just say that if I enjoy reading about cars I can't afford, then it's more fun to just go up to the $200,000 and above range and get into a new McLaren, Ferrari, or Lamborghini instead of all the cars on the cover of Road and Track. Having said that, you should read the article in this issue about the secret tunnel in Pennsylvania that Chip Ganassi uses to test cars, you won't believe it.