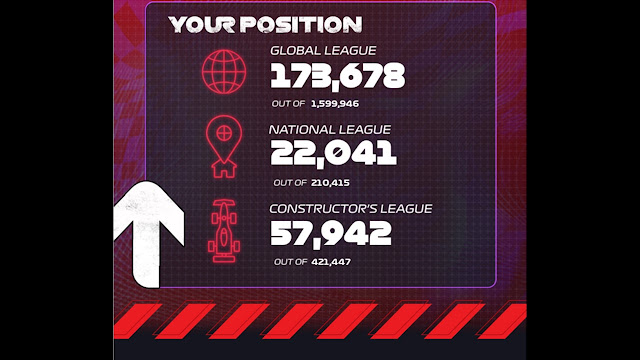 In a never ending quest to have fun doing car stuff, here's a look at how my Formula 1 Fantasy team did this year on the official F1 website. This competition is open to anyone and doesn't cost anything, so if you follow F1 at all I'd suggest signing up for the NMS Fantasy League in 2023 and giving it a shot.

First off, apparently I've slightly increased my average score per race over the past three seasons of playing this contest on line, with the following results.

For 2022,in a field of 1,599,946 total competitors from around the globe, I finished in 173,678th place! I'm not sure about this, but I don't think there is a trophy for anything below 173,000th place. OK, maybe I'm not the greatest at this game, but at least I beat SOMEBODY! Oh hey, I beat about 89.2% of the people that played the game, how about that! This put me ahead of 1.4 MILLION players, much less the other 7.8 billion folks on the planet that didn't even play the game! How about that! #F1Fantasy