NMS-North Moves Up A Notch

After last weekend at New Jersey Motorsports Park's Lightning course, we're happy to announce that NMS-North has moved up from HPDE group 1 to HPDE group 2. What's that mean in English? Mostly that in group 1 you drive with an instructor giving you tons of great advice on track, and when they say you're ready to drive by yourself SAFELY, then they can allow you to move up to group 2. So, in the grand scheme of things it's not the biggest deal in the world, but it's a small step in the never-ending battle to improve as a driver. This is how it works with the NASA organization across the country, and in my case, the NASA Northeast group. This was the 4th event and 4th different track I've run with them, and I feel like every weekend has been a big learning experience. There are 4 HPDE groups, so you can tell I have a long way to go. In addition to HPDE, (with an emphasis on EDUCATION) the NASA folks hold races, time trials, racer licensing school, and other great driver programs at tracks all over the country. I highly recommend driving YOUR car on track. What are you waiting for?

What did I learn this weekend? A lot! Specifically I learned my way around the Lightning track without getting lost, learned where the corners and the flag workers are (which is very important,) and improved my approach to a few corners in particular that made the laps just a bit smoother. Similar to autocross, the driver should make as smooth a line of a big curving path to maximize their speed, instead of short little straight lines from point to point. There are plenty of great resources for learning the basics of corner entry-apex-track out, so I won't try to write a new encyclopedia on it, but I will say that I need improvement on ALL the aspects of getting a car around a track quickly.

As you can see from the above photo, I also learned to drive in the rain a little bit more. Our instructors made it clear that the thing to do was to slow down, stay off the painted surfaces (curbs and lines, slippery when wet!) and they were right. Along with that advice they explained to stay a bit away from the edge of the track as a safety margin, if you braked into a corner and the car got a little slippery, you had that extra space to keep the tires on the pavement. They were right, too!

Let's go to a quick video for a memorable part of the weekend. I was trailing a Honda Civic down the main straight, and one of his tires gave up the ghost, which sent some tire debris my way. Not a big deal since the Civic driver expertly kept it on the track, and I moved out of the way. I still thought this was a little bit of excitement I should share, so here it is with a bit of Slow-Motion to make it awesome! 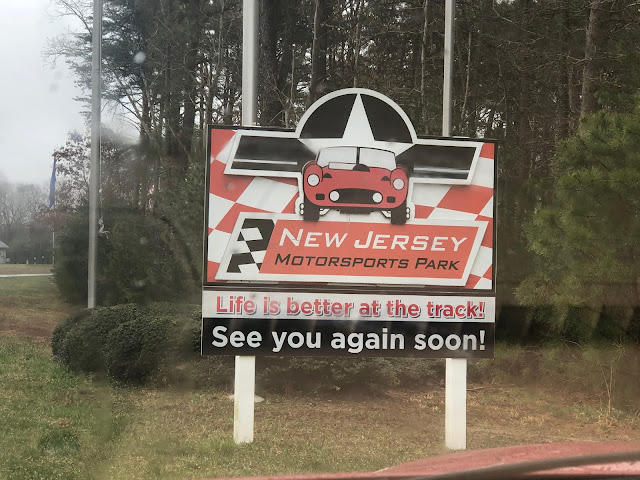