How Do You Get To Formula 1?

For the NMS team, we're going to get to F1 by flying to Austin TX (on Halloween no less), buying tickets for the 3 days of practice, qualifying, and race day, then throwing in a hotel, rental car, eating some ("some" is defined as "a lot of...") BBQ and Tex-Mex, and enjoy the race! Shoot, we might even run into some old friends in the area, you just never know what might happen in Texas! 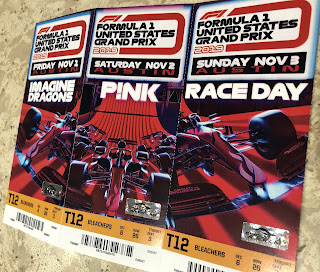 You might find this hard to believe, but apparently there are people that are NOT really interested in auto racing, or even Formula 1. Since this seems ridiculous to me, I'll grant that it's just possible, because the race folks in Austin are also throwing some concerts into the race weekend, probably in an effort to get every single person in the state of Texas out to the Circuit of the Americas (COTA) at some time during the weekend. After Fridays practices, Imagine Dragons is playing. Saturday night when the cars stop, then P!NK will perform. And, just added but not even on the tickets, following the race on Sunday, you old-timers from way back in the 1980s will want to stick around to CELEBRATE GOOD TIMES with Kool and the Gang! Not just Kool...Not just THE GANG, but Kool AND the Gang!

Like any great trip, we've planned on a few extras to make the spectating more fun. Binoculars, ear-plugs, F1 and COTA apps to keep up to date on info, and of course a phone and charger to take plenty of photos.

Now to answer the question in the title of this post, you could get to F1 any number of ways. Maybe you're super rich, or own a gigantic automobile company or your own F1 racing team. I'd have to wager that if you OWN the team, they'd let you tag along and watch the races. If Piero Ferrari gets to see some races (and I've seen him at the track on TV anyway), then you can do it too! It's an easy 2 step process.  First, you buy a team, and second, you go to the races! As Woody Harrelson says in Zombieland 2: "You're welcome America!"

Another way to get to F1 is to work there. Maybe you could be a car designer, one of the mechanics, or the chef that feeds an entire team of hard workers at the track. For more info on this method, I'd recommend you read Steve Matchett's  book The Mechanic's Tale, wherein he tells how he did just this, as a mechanic. Any other book by an F1 driver would also give you some insights, and there's a ton of them!

Anyway, there's lots of ways to get to F1, and while it would NICE to get there as a driver, we're looking forward to being fans in the very near future! If you're looking for tickets to an F1 race, or more info on the subject, just hit their official website: FORMULA 1
Posted by robert.a.nixon6@gmail.com at 5:33 AM