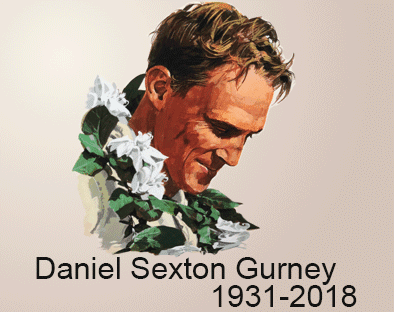 The NMS team would like to salute one of the pioneers of American racing who unfortunately passed away last week, Dan Gurney. If you're not familiar with him, we suggest you do some on line research, because we can't do justice to the many things that he achieved during his lifetime. More than the accomplishments, I think Dan was influential because he did things his own way, and not only won races, but make a mark on the sport both in and out of the cockpit.

Just a short list of Dan Gurney's highlights would include:

-wins in Formula 1, NASCAR, LeMans, sports cars
-winning Formula 1 races in his own team's car that he helped design
-Dan Gurney started the tradition of spraying champagne on the podium after a race
-He invented various designs that are found on race cars today, such as the Gurney Flap
-His post racing career included technological designs used on the Space X program today
-the first driver to wear a helmet (Bell brand) in F1
-the first driver to win a Formula 1 race in a Porsche factory team car