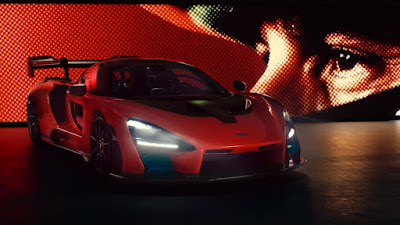 Ayrton Senna was the three time Formula 1 champion from Brazil that raced for the Toleman, Lotus, McLaren, and Williams teams in F1 from 1984-1994. NMS is proud to announce that we have acquired one of the most famous cars in F1 history, the 1988 McLaren MP4/4. This Honda turbo powered car was used by Ayrton Senna and four time champ Alain Prost to win 15 of the 16 races held in 1988, so it's one of the all time greats.

While we don't like to talk about money very often, NMS was able to purchase the car for $2.99. Yes, that's right, two dollars and ninety-nine cents. Naturally a REAL MP4/4 would go for millions, so maybe we should point out that the $2.99 version is an extra car you can buy and race in the Codemasters Formula 1 2017 game on your computer. Oh, you didn't think we bought a real race car for $2.99 did you? Oh well! Codemasters

In other Ayrton Senna car news, in reality, the real McLaren Automotive Group  over the weekend just unveiled their newest road car. This monster has 787 horsepower, only costs a million dollars or so, and has been named in honor of Ayrton, so the model will be known as the "Senna." Here at NMS north we've just moved the McLaren Senna to the top of our lottery-winning-fantasy-car-to-buy list. McLaren: Senna
Posted by robert.a.nixon6@gmail.com at 4:59 AM