A "School Report", you mean like a book review, or "how I spent my summer vacation?"


No way, Novice Autocross Driver school, which we just held today at PUNGO!
The Tidewater Sports Car Club TSCC hosted this event and I'd have to say that a great time was had by all! While no one would admit that they could be a better driver, driving a car is a skill like any other, so it pays off big time to take a lesson or two. People pay for piano or guitar, tennis, or golf lessons all the time. Driving is no different, since unless your name is Mario Andretti, it's likely that there are faster drivers than you, so it makes sense to learn what they know.


In our one day school, we split our 20 or so students into 2 groups, so each driver got to be driving half the time, and spent the other half of the time working to pick up any cones that were knocked down, learning how an autocross event works (with lots of volunteers), and getting to watch other people do the same driving techniques that they did. As Yogi Berra probably said, "You can observe a lot by watching." 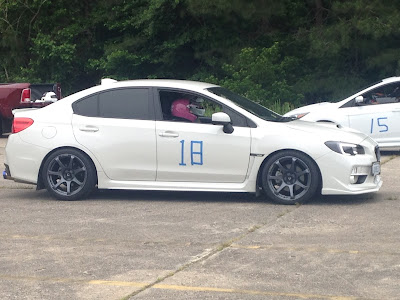 The first step, like pretty much every step in today's activities, was focused on safety. Each driver had to prepare their car for the technical inspection, which involves two steps. First, they had to empty their car of loose items that could start flying around when the car was being driven hard (you don't want something getting wedged in your brake or gas pedal do you?) Also, taking out the spare tire reduces the weight of your car, so that instantly makes you faster if you believe in the laws of physics! Step two, was to take this fine automobile over to the team of TSCC volunteers and let them just check the key safety features: wheels attached, brakes and gas pedal work, battery not loose, and important stuff like that. 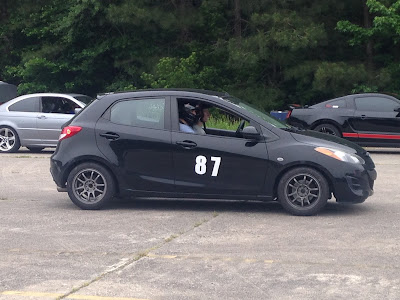 Then, after a driver meeting to go over the plan and again highlight the safety rules, it was time to drive! I was lucky to get two students today, so first I was riding with Mike in his first generation Miata. My second student was Dallas in his stock Focus, so that was fun to be in a rear wheel and a front wheel drive car.


Driving round 1 for Mike and Dallas was split between two stations that we could do as we pleased, so we tried both several times and each driver spent a good  hour behind the wheel. This is where I want to point out the term "seat time" which is used to talk about how much you drive. Getting more seat time is the best way to get faster, because it just means you are getting to practice more. A solid hour behind the wheel with an instructor SHOULD make you a faster-safer-better driver. If it doesn't, you need a different instructor! 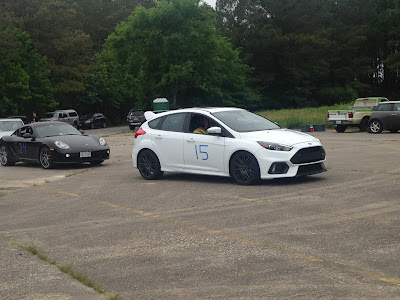 So our choices were a straight, short slalom to practice car control and feeling the weight transfer, like a downhill skier going left-right-left around poles in a straight line. With cars we just use small traffic cones on the ground, but the idea is the same. You want to go as fast as possible without knocking over the cones. By practicing slowly at first, it's much easier to drill on the coordination of hands (steering) and feet (gas on, lifting, braking if needed). Getting to practice just a straight slalom like this, over and over in a row, is a great way to drill and get better. If you wanted to get better at shooting free throws in basketball, I'm pretty sure you'd do the same thing and just go park yourself on the foul line and shoot 100 or 200 shots a day. 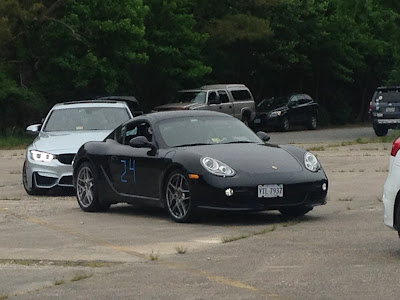 After a good amount of slalom practice, we headed over the skid pad. Today we had two pads on course, with a smaller and a larger circle. Each driver could vary their practice by circling just the small one, just the large one, driving figure eights around both, or any other variation. We worked on doing a simple circle first, to feel the weight of the car and see how it reacted to increased throttle. By doing both, or the figure eight, we next added circling both clockwise and counter-clockwise. With this drill and in using both circles, it added a short straight for the drivers to start accelerating out of a turn, braking or lifting into the next turn, smoothing out their circle, and then getting back on the gas to do it all over again. Feeling the car react and trying to make it smooth (and eventually faster), plus feeling how much you can brake without blowing up your car are just some of the points of this exercise. 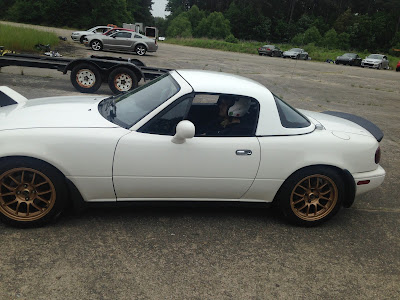 After a lunch brake, (BRAKE, get it?), we tweaked the skid pad area and set up a very short autocross for the afternoon. This course was very short, but it used a long slalom, a big sweeper, and then some offset "lane-changes" in a long straight to the finish line. For this part of the day we had the electronic timing system hooked up, so it was time to get instant feedback on how fast each driving run was done. We started slow, and again each set of drivers got about an hour of repeating and practicing on the same timed course. After each run we discussed how it went, and I always like to ask "what one part of the course can you go faster?" With lots of runs, this system works for me, and lets the student and instructor talk it over, and decide a strategy for improving. All along the way, the driving time for both Mike and Dallas kept dropping, so I'm going to say it was a great day!


Just to see how they did, here's their times over each run, and just like magic you can see their times drop as they refined their technique, and found precious tenths of seconds here and there. Remember, this is on a very short course of hard driving, and we're just improving their driving skills and not adding power or adjusting the car at all. At some point during the session, Driver A and I were checking tire pressures, so that's why he got a few less runs than Driver B.


(The "xx" in run 7 was from a temporary glitch in the timing system, so we thought it was the best run so far but can't prove it.)

Both of these drivers showed great improvement, and made their fastest runs at the end of their session with me out of the car! By dropping 4-5 seconds of time, they showed a lot of skill in a short amount of time. Amazingly, they both ended in the 18.2 range, so good stuff all around.

If you can find a novice autocross school or any other type of driver school, my vote is to sign up now!
Posted by robert.a.nixon6@gmail.com at 5:31 PM