Since you can't be driving on a track or at an autocross event EVERY day, sometimes it's fun to just take a trip. We just wrapped up an epic road trip to attend Brian and Alicia's wedding in South Carolina, and what better way to get there from New York than to drive? Don't answer that, it's just a rhetorical question. Driving is better, and if nothing else, the TSA doesn't bug you.

So, what would be the best way to drive from here to there? Clearly NOT I-95 down the east coast. Nothing personal against New York City, the Jersey Turnpike, Philadelphia, Baltimore, Washington DC, or even South of the Border, but come on! We've driven I-95 enough to not want to do it again, so we headed west.

Our first leg took us to the exciting hamlet of JFK airport to pick up the European extension of NMS, Katie and Joanna direct from Amsterdam. It would have been fun to drive to Holland and pick them up, but we just didn't have time to take the boat. So, from JFK we have to "Escape From New York", as Kurt Russell might say (or make a movie with that title.)  This brings up the most traffic we encountered, which (SURPRISE!!) was in New York City!

But seriously, it gave me a great opportunity to get a photo of the sign as you leave Brooklyn, so FUGHEDDABOUTIT! 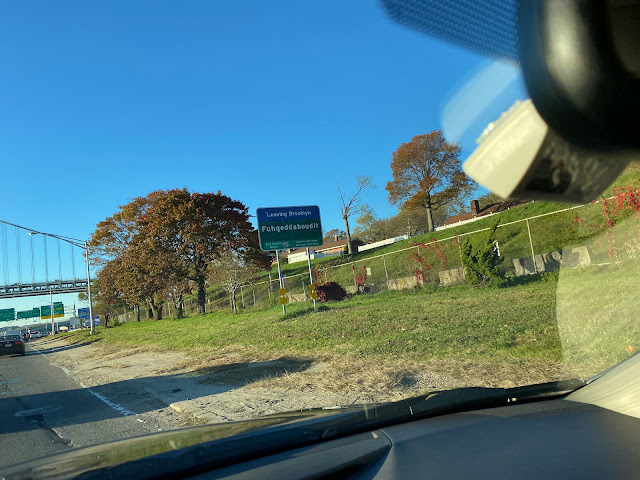 Long story short, the wedding was great, the trip was wonderful, and to be honest, it is really fun to drive!